Play Wild Item Worth Wiki
Register
Don't have an account?
Sign In
Advertisement
in: Pet, Unavailable, High Demand,
and 4 more

View source
watch 02:46
The Quarry - The Loop
Do you like this video?
Play Sound 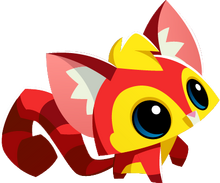 The Pet Sugar Glider was originally released on June 2017 at Claws ‘N Paws, and at the Sapphire Shop for 50 sapphires. They were removed on February 2018. It is commonly referred to as "Pet Glider", “Glider”, or "Sugar Glider" by many Jammers as an abbreviation. Its default appearance features a semi-circle shaped head which is larger than its body, a tuft of fur between its oversized ears, stubby legs, and a fluffy, curled striped tail banded with darker stripes. The original variant of the pet earned a "Rare!" tag on July 1st, 2021. When referring to a non-token Pet Sugar Glider, Jammers may add "Rare" or "Non-Token" before saying "Pet Sugar Glider”.

Note: Depending on its color combination, the Pet Sugar Glider will go for more or less than the worth listed below.

Note: Uncommon colors consist of and are not limited to: sage, yellow, orange, light green, periwinkle, lavender, and peach.

Note: Natural colors consist of and are not limited to: beige, brown, tan, light brown, creams, black, grey, and white.

Note: Solid gliders typically go for more than listed worth; depends on the Jammer.

Note: The level does usually not affect a Pet Sugar Glider's worth. However, some jammers have a preference and may trade more for certain levels.

Note: There are 2 variations of the default Pet Sugar Glider. The second version is worth less than other one; do not get scammed.

Note: Using a Pet Adoption Token, you may obtain a randomized variant of the Pet Sugar Glider. Watch out for the differences - the original will always have a "Rare!" tag and never have a pet token icon on the left.

Note: Pet Sugar Gliders with a Pet Adoption Token icon do not follow the same eye-type rarity (X eyes are worth the least and other eye types are roughly equal in worth); do not get scammed.

Note: Token Pet Sugar Gliders do not have the same worth as the original Pet Sugar Gliders, because they are obtainable through Pet Adoption Tokens. Therefore, they are worth less, especially due to the fact that they are much easier to obtain.

Note: Using a Golden Pet Token, you may obtain a golden variant of the Pet Sugar Glider. Watch out for the differences - the original will never be solid gold in color and never have a pet token icon on the left.

Community content is available under CC-BY-SA unless otherwise noted.
Advertisement